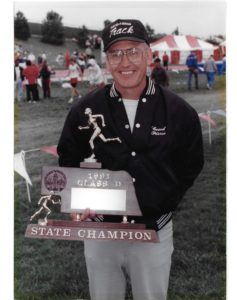 In his 50-year coaching career, 48 years at Eustis and Eustis-Farnam, Elroy Pierce earned the title of “Coach”.  He started at McPherson County, coaching football, basketball and track.  Moving to Eustis, he was the head coach or an assistant coach in football, boys and girls basketball, cross country, golf, and track and field.  Preaching the mantra “Running is fun,” Pierce’s teams found their greatest success on the the track where he coached the girls for 31 years and the boys for 17 years.  The Eustis-Farnam girls won three Class D state track championships and finished second four times between 1988 and 1994, and they strung together 33 consecutive meet championships starting in 1990.  In addition to coaching, he was the school’s athletic director for 27 years.