Let’s see now, the Arcadia high school football team of 50 years ago didn’t have a Heisman trophy winner….Didn’t have bigtime college recruiters beating a path to their football field… Played in one of Nebraska’s smaller classes…..Had a lot of chores to do before and after practice.Still, they made a lasting impression and turned into something special, a bunch of kids who wanted to play, who had a good coach, who worked hard to succeed, and and success came.

In the process, they also developed a lifetime bond that was ever so evident in October at the Nebraska High School Sports Hall of Fame Foundation 2006 awards program.

Why else would 27 players from the 1956 Class C football team turn out to receive the Hall’s Golden Anniversary Award in Lincoln. Their high school experience, their pride in their community, their respect for their coach—even after all these years—brought them back almost to the man. 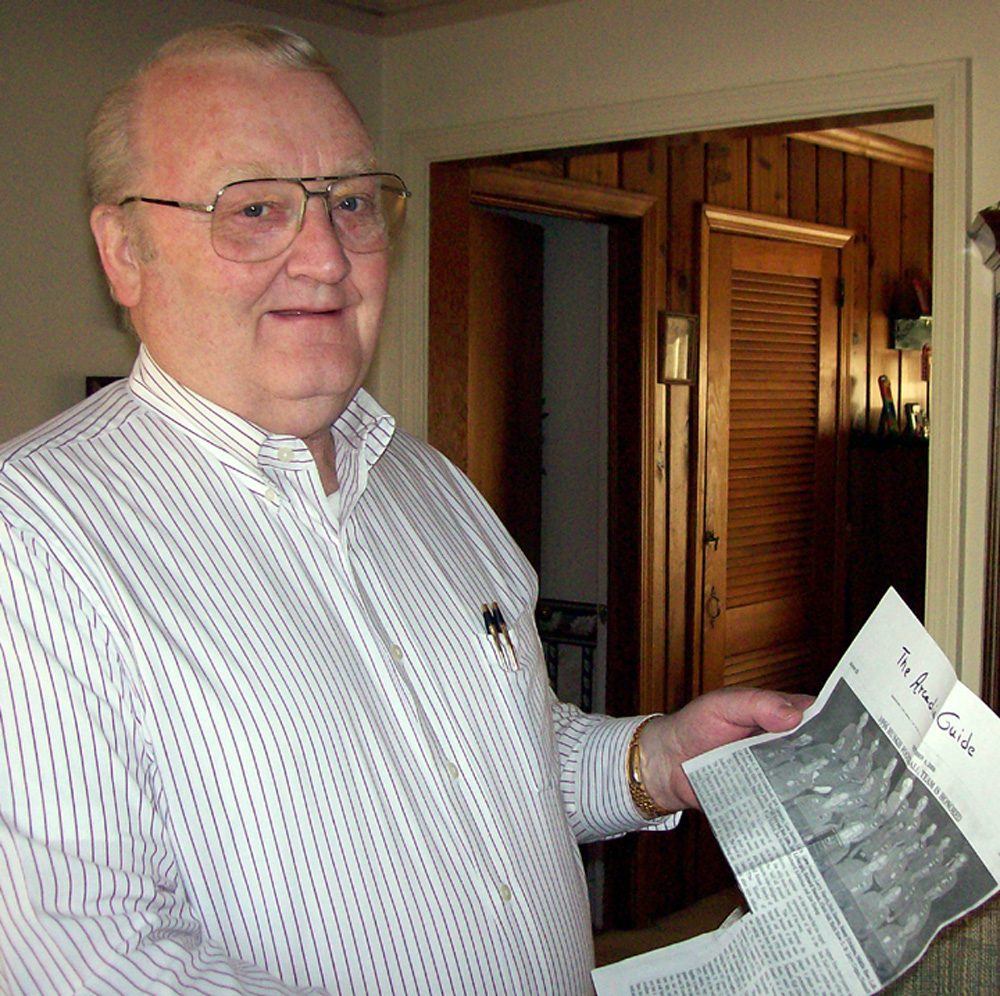 Max Masters came from Taylors SC for the Hall of Fame fun.

“It was the first time we’ve all been together,” said Max Masters, who traveled from Greenville, SC, for the Hall of Fame festivities. “There have been class reunions but nothing special just for the football team.”

They were perhaps surprised a bit that they hadn’t been forgotten.

“This ended up being a community thing,” said Masters, pointing to the Labor Day parade and community celebration in Arcadia this year where a float honoring the football team sort of had center stage. The Friday after the Hall of Fame honors, the team was honored at an Arcadia high school football game. They had a social gathering in one of the Memorial Stadium suites in Lincoln. Special shirts – in Arcadia High’s red and white – were ordered for them and they wore them to the Hall of Fame program.

Truth is, they were well-deserving of all this. The 1956 team and the 1957 team were unbeaten and UNSCORED ON (Has any other school had back-to-back shutout seasons?). The 1958 team was unbeaten but the no-points streak ended. It was a great four/five-year run of football success, perhaps one of the best sports performances in the history of the school.

The thrill for Masters was “just being a part of it,” he said. “It’s a small school and just a handful of boys didn’t go out. I was pretty small, so I didn’t make all that big a contribution toward all the team’s success as the others, but I was happy to be a part of it.”

Glen Vannier was their coach. “Being under Coach Vannier was something that made it worthwhile. He was a no nonsense coach, no Shenanigans. During that Sunday at the program, you could see the rest of the team felt the same way about him, too.”

The Hall of Fame’s awards for teams started with the 1995 banquet. The idea is to honor teams of 50 years ago (Golden Anniversary) and 25 years ago (Silver Anniversary) each year. The first teams honored were Gothenburg’s 1945 football team (gold) and Lincoln East’s 1970-71 basketball team (silver). Similar indications that special bonds among teammates form during a high school sports season pop up rather regularly when dealing with the Silver and Gold Anniversary honorees.