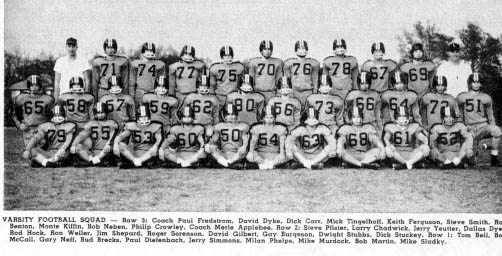 Undefeated (8-0) and The Associated Press Class A state champion, the Minutemen allowed only one touchdown all year. The team included three all-state starters – Dallas Dyer, Monte Kiffin and Mick Tingelhoff.

LEXINGTON — There was something special in the crisp fall air in 1957 — something so special that 50 years later, longtime residents still talk about the 1957 Lexington High School football team and their remarkable season.
The team was undefeated and unscored upon until their last game of the season, when North Platte scored on a screen pass in the first quarter.

People would come from surrounding towns just to see the Minutemen, and the stands were packed at every game.

Area residents will have a chance to meet and reminisce with members of the 1957 team as they gather this weekend in Lexington for a reunion, which will precede their induction Sunday into the Nebraska High School Sports Hall of Fame as a Golden Anniversary Team for 2007-08.

“Our team reminded me of the movie ‘The Hoosiers,’” said Steve Smith of Toccoa, Ga., who was the starting quarterback that year. “We were only four or five boys over into Class A that year, and we played North Platte, Kearney,and Omaha Westside.”

According to research by Ray Ehlers of Lexington, who nominated the team for the Golden Age Award, Lexington was a member of the Southwest Conference at that time, which ranged in size from Curtis, the smallest at Class C, to Class A schools North Platte, Kearney, McCook and Lexington. Other conference schools were Cozad, Gothenburg and Holdrege, which were Class B.

“Lexington defeated Omaha in a game played at Lexington. What was unique about this game is that the team and 300 Omaha fans rode a special train to Lexington and returned to Omaha in the same manner,” noted Ehlers.

In those days before buses were the norm, the team carpooled to games, recalls Dick Carr of Lexington, who was a senior defensive end for the Minutemen.

Those drives were important for building relationships, recalls Dave Smith of Lexington, who was the sophomore center. In fact, looking back at the upperclassmen, one reason they were so good was all the time they spent together, he said.

“I remember my aunt telling my mom that she was always cooking as there were always five to six boys and sometimes 15 at her house,” said Smith. “They studied together, they spent weekends together, and intuitively they knew what each other was going to do.”

It also helped that the school created an atmosphere of camaraderie with pep rallies every Friday before the games, said Ruth (Snurr) Carr, one of the cheerleaders that followed the team. “We also had a dance after every home game.”

Another reason they were able to win so many games, said Smith, was the coaching.

Head coach Merle Applebee had a reputation for being a tough disciplinarian and making the team adhere to the rules, but he was also ahead of his time in calling the plays.

“We had a triple-option play that we ran the first four games,” said Smith. “We were well scouted but no one could break that play. (Mick) Tingelhoff was the center and I would take the snap, pitch to (Milan) Phelps and he’d act like he was going to run, then pull up and throw the perfect halfback pass.”

“I don’t think I had a Coke until I was well into college,” Smith said.

While the helmets of the era left a little bit to be desired — most only had a one-piece nose guard — by 1957 each uniform had a pretty good set of padding, said Carr.

Another reason they had to be so good was because their uniforms that year were so ugly, said Carr. “We had the ugliest uniform in the state. It was olive green with black and orange stripes,” he said.

“Those uniforms were the first art of camouflage,” said Dave Smith. “No one could see who had the ball.”

While the first string saw most of the action, the second string, or scout team, was down in the trenches, taking the hits and keeping the starters sharp. Earl Brecks of Lexington was the quarterback for the scout team. “We were always black and blue by Thursday,” he recalls.

The second stringers and underclassmen earned the respect of their peers. “What impresses me, looking back,” said Steve Smith, “are the guys who weren’t very big, and day in and day out, they gave everything they had. How tough that must have been, and what grit and determination they had. I have a lot of respect for them.”

“Practices were horribly brutal because we had to scrimmage against each other,” said Steve Smith. “Games were fun in light of those practices.”

Mick Tingelhoff, who was the center and a linebacker on defense, recalls how awesome it was when everything came together during their senior year. The team had lost all its games their sophomore year, then won all but one their junior year.

“We all grew up and we had an outstanding group of guys.”