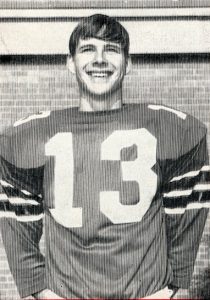 Scottsbluff (Class of 1969)
Frosty Anderson provided much of the spark for storybook seasons for the Scottsbluff Bearcats. Back-to-back state championships in track, conference championships in football and a state basketball tournament berth kept Anderson, a future Husker football hall of fame inductee, in the limelight. His 12 touchdowns his senior year – nine receiving, two punt returns and one fumble return – helped Scottsbluff to the Big 10 Conference co-championship. He started for two seasons in basketball and placed in the sprints at the state track meet, helping set a school record in the 880-yard relay. At Nebraska, he lettered for three seasons and graduated with 991 receiving yards, which ranked fourth all-time. An All-Big Eight pick as a senior, he led the conference in touchdown receptions and was drafted in the eighth round by the New Orleans Saints.