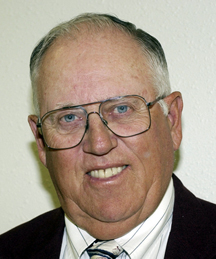 Coach.  Fred Bessler had a career football coaching record of 248-81-1 and got his start in Brule. From there, Bessler went to Madrid where he was the head coach of their 9-0 eight-man team that was ranked No. 1. He then moved on to Cozad where he was an assistant coach for the state champion team in 1969. From 1975 to 2002, Bessler coached at Imperial. As the head football coach for 31 years, his teams won 206 games and two Class C-1 runner-up trophies. He was a head coach in the West Nebraska All-Star Football Game twice and an assistant once. In 1983 he was an assistant coach in the Shrine Bowl, and in 1995 he was a head coach. He was also the head track coach at Imperial, where his teams won 26 consecutive conference championships. He also coached basketball.

Coach Fred Bessler, in his final season as Longhorn head football coach, meets with his team after their August, 2001, win over Cozad, giving Bessler his 200th win in Imperial. (Republican file photo) By Jan Schultz, The Imperial Republican     Fred Bessler will join an elite group of Nebraskans later this year when he is inducted into the Nebraska High School Sports Hall of Fame Foundation.

He will join 12 of Nebraska’s greatest all-time athletes, four other coaches, a longtime official and a contributor who make up the 2005 Hall of Fame Class.

They will be honored during an induction ceremony Sept. 25 at the Lied Center in Lincoln.

According to Buck Mahoney of the Foundation, Bessler is the first to gain the honor from Imperial in the 11 years of the Foundation’s existence. The 2005 class brings the total number to 239 honorees.

“It’s humbling,” Bessler said of his selection to the Hall of Fame.

“The fact that you are associated with longtime successful coaches across the state of Nebraska, it’s very humbling. It’s much appreciated,” he said.

Bessler retired from teaching and coaching in 2002, after 27 years in the school system and 37 years overall as a coach.

However, he remains a regular substitute teacher at CCHS and doesn’t miss very many Longhorn athletic events.

He coached football at Brule, Madrid, Cozad and Chase County, compiling a 248-81-1 career record, with 206 wins in Imperial and a pair of Class C-1 state runner-up finishes.

At the time of his retirement from football, his career coaching record was among the top five in Nebraska.

A highlight at Madrid in 1967 was his football team’s 9-0 record and a No. 1 state ranking. That was before Nebraska had football state playoffs.

Bessler was an assistant Shrine Bowl football coach in 1983, then was head coach for the Shrine all-star game in 1995.

His success in coaching track will also be highlighted when he is introduced at the induction ceremony later this year.

Most notably, he coached the Longhorn boys’ team to 26 consecutive SPVA conference championships while at CCHS.

He also spent a combined 16 years coaching boys’ basketball at all four high schools in Brule, Madrid, Cozad and Imperial. He spent six years as an assistant Longhorn coach from 1975-81.

A coach for 27 years at Chase County High School, Bessler has many, many good memories in all the sports he coached.

However, he pinpointed a few from his years as a football and track coach here.

One of his fondest memories in football was the 1989 team, he said. The team had a 2-5 record late in the season, but went all the way to the state football semi-finals that year, winning four straight games and finishing with a 6-6 record.

“That was probably most rewarding,” Bessler reminisced, “because they went so far and overachieved.”

Several state track performances are among the good memories for Bessler, as well.

While he wasn’t the individual jumpers’ event coach, Bessler said Ed Kaiser’s 6′ 9″ high jump in 2002 at the state track meet, another gold medal performance, is high on his list of good memories, too.

Those three still remain on the CCHS track record board.

But, at the top of the list for track are the 26 consecutive conference championships. That is hard to match anywhere in the state. “That was due to the high participation of athletes that we had. It was always satisfying to have 40 to 50 out for track,” he said.

That was true with football, as well.

During the Longhorns’ two football games in the state finals in 1997 and 1998, the CCHS team had an average of 70 players on the roster both years.  Bessler made certain they all suited up for the games and all received state medals those years, even though the NSAA only provided 38 medals to each team.

As Bessler nears the end of his third year in retirement, he said he does miss a lot of what comes with teaching and coaching. “I really miss the day-to-day association with the kids, and obviously, the games” and meets, he said.

He said he was “blessed” with great assistant coaches in all of his years in coaching, and those associations, too, go beyond the court and field.  He said he’d be remiss if he didn’t acknowledge the support from his family, as well, especially his wife, Sandy, and the community support all of those years at CCHS.