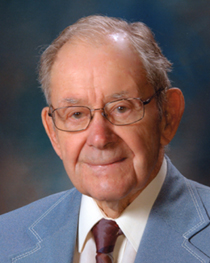 Fred Egley’s long association with Norfolk athletics began as an assistant coach in 1939. He started the school’s gymnastics program the next year and was football coach in 1942. After serving in the Pacific in World War II, he returned to Norfolk and education. He became athletic director for the high school and the city’s junior college in November 1950. He kept his high school duties through 1969. He was on the NSAA board of control from 1965 to 1970 and was junior college AD through 1981. A basketball and football official for many years, his close association with athletics allowed him to serve as a motivator, counselor and supporter, contributing to the development and progress of coaches, teams, athletes and activities in Northeast Nebraska.