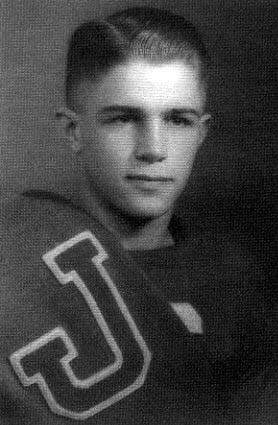 Athlete. A 1937 graduate of Jackson High School situated in northeast Lincoln, this versatile athlete had an honorable career in three sports: football, basketball and track from his freshman year forward. He was an all-city back for four years on the gridiron. Named all-state in football his junior and senior years, the Jackson High team was actually unbeaten for three years, at one time with a 30-game winning streak. Every year he was in high school the Jackson High Cardinals were in the Class A state basketball tournament, finishing runners-up in both 1936 and 1937. At one time he held the state track & field record in the javelin.

Making a smooth transition from the red and white of Jackson to the scarlet and cream of the University of Nebraska, he was the Big Six champion in the javelin in 1938. Of legendary note are his three years as a letterman in the backfield of the Cornhusker football team, finishing his career in the 1941 Rose Bowl appearance of the Cornhuskers.