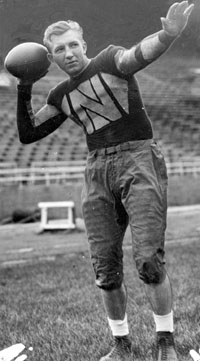 Athlete–One of many great high school football players to wear the red and black of Lincoln High School, in 1928 as a junior he scored four touchdowns in the state championship game, As a senior in 1929, all-state honors were awarded him as a fullback. He also did well in track, serving on a state championship team where he threw the discus. As an all around excellent player who could run, kick and pass,  he often left the competition wondering what he would do next. For three years, 1931-33, George Sauer was a great fullback for the Nebraska Cornhuskers, helping them win the conference, and reaching All-American status his last year on the gridiron in college. He played a number of years in professional football, then went into coaching.

At the University of Nebraska, Sauer became an emulated football hero.  Nebraskan kids idolized the Lincoln native often pressing their mothers to sew George’s famous number 25 onto their sweaters. Coach D.X. Bible glowed when speaking of the player, “He was probably my best all-around athlete. He was great at carrying the ball and he was one of the best on defense. He simply rolled up his sleeves and met the ball carrier head on.”  At the end of his senior season he led the voting for players in the New Year’s Day All-Star game. Sauer distinguished himself by intercepting passes and scoring the only touchdowns of the game. After the game news writer Lawrence Perry commented that Sauer, “stands clearly as the premier ball carrier in the nation.”

In 1961 he was manager and assistant coach of the then New York Titans, who later became the Jets. He was instrumental in the signing of quarterback Joe Namath.