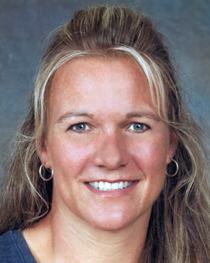 Athlete. Gibbon (1990)
A pillar of Gibbon’s back-to-back state championship teams of 1988-89, Ginger Keller scored 1,413 points in high school – making the all-class all-state second team as a senior. The Buffs won 66 straight games with Keller at center, and she averaged a double-double — 15.3 points and 10.5 rebounds per game – while leading Gibbon to its second state championship in 1989. Her senior year, she averaged 26 points and 16 rebounds per game. In her four years, Gibbon posted an 89-4 record in basketball. A dominating middle blocker on the volleyball court, she also qualified for the state track meet in four events. At the University of Nebraska at Kearney, she graduated as the Lopers’ career leader in points (1,758) and rebounds (847) and led UNK to its first-ever NCAA post-season appearance in 1994.