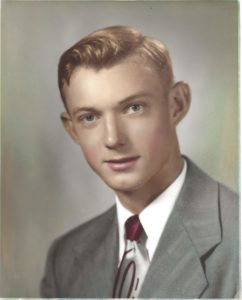 A “basketball ace”-he was All-Class All-State in 1950-Glenwood showed his athletic ability at the 1950 State Track Meet.  A one-man team, competing without a coach, he won the 100 and 220 yard dashes and the long jump to score enough points to give Hildreth the Class D team Co-Championship.  On the basketball court, Einspahr led the Greyhounds to an undefeated State Championship in 1949, scoring a state record 34 points in the quarterfinal win.  Hildreth also finished second in 1948 and lost in overtime in the 1950 semifinals.   He played freshman football at Nebraska and after a stint in the Air Force, he played basketball at Kearney State College.