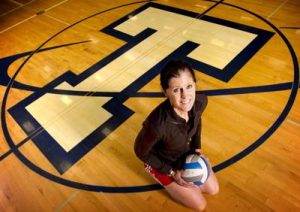 Gwen Egbert built two volleyball dynasties at Papillion-LaVista and Papillion-LaVista South high Schools, with each school forging state championship “three-peats.”  Egbert started her coaching career with Papillion-LaVista in 1987 and over the next 15 years led the Monarchs to the State Championship match eight times, winning state titles in 2000, ’01 and ’02.  In 2003 she took over Papillion-LaVista South, building another dynasty that achieved runner-up finishes in 2008 and 2009 before going on a three-year run that included three state titles and a 119-1 record.  The lone loss in that three-year period was to a nationally-ranked team from Kentucky.  Egbert left the high school ranks in 2013 to take over the Doane University Tigers, finishing with a 684-233 record as a high school coach.