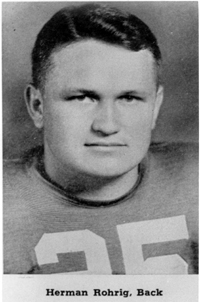 Athlete. No better example of the complete athlete exists than this 1936 graduate of Lincoln High School. He lettered three years in three separate sports: football, basketball and track. His versatility is illustrated by the help he gave the Links at state track meets. He did well in the long jump and tossing the then college weight discus. In the football backfield, he was, well, more than most defenses could handle.  At the University of Nebraska he earned three letters in football and played on the legendary Rose Bowl team in 1941, throwing a touchdown pass in that treasured game to Cornhusker fans.  After playing professional football with the Green Bay Packers, he became one of the most respected officials in modern day football, working games for the old Big 7, the Big 10, the NFL and being chosen to work the first Super Bowl game. He became a respected supervisor of officials for the Big Ten Conference. He was inducted into a number of sports halls of fame.