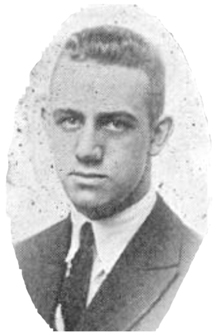 Athlete–A 1921 graduate of the Omaha High School of Commerce then situated at 17th & Leavenworth. Ike Mahoney deserves to be remembered for his athletic prowess, just as one of his high school classmates, Roman L. Hruska, is remembered for public service. Helping the boys of Omaha Commerce achieve an early Class A state championship in basketball, he was also talented elsewhere: All-state three years in basketball, once in football and a star in baseball and track. He played in four state basketball tournaments from 1918-21 and scored 141 points, the state record for 34 years. Ike Mahoney went to college at Creighton and he assisted the Bluejays efforts in both basketball and football. He was one of the earliest Nebraskans to successfully compete in professional basketball. A great early all-state caliber high school athlete who will not be forgotten.