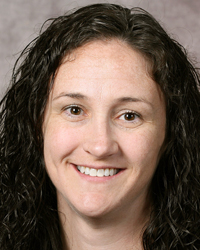 Jami Kubik did it all for the Cambridge Trojans, who dominated their class in her time. With Kubik one of the centers of attention, Cambridge won back-to-back state volleyball and back-to-back state basketball championships. She earned all-state honors in volleyball as a junior and a senior, and was the honorary Class C1 all-state captain in 1993, and she was four-time state track qualifier in three events, setting school records in the 100-meter high hurdles, the 300-meter low hurdles, the long jump and the 1,600-meter relay. But she excelled in basketball above all other sports, starting Cambridge on its 81-game winning streak. Nebraska’s Miss Basketball in 1994, she was a two-time all-class all-state pick, scoring 564 points her senior season. At the University of Nebraska, she lettered for four years, playing on two NCAA Tournament teams and earning Academic All-Big Eight honors.