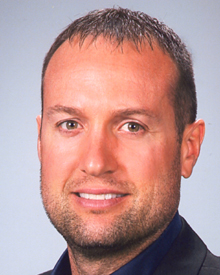 Jason Glock was the cornerstone of the Wahoo basketball dynasty that compiled four straight state championships and 114 straight victories, A two-time all-class all-state pick, he scored 2,167 points in his career, including 779 during his senior year, and averaged 9.9 rebounds per game in his career. A stright-A student, he tallied 52 points in a game against Schuyler and set a state tournament record with 260 career points.He garnered High School All-American Honors from Street and Smith/Nike, McDonald’s and Converse. In his four years, the Warriors posted a 101-1 record – the lone loss coming in a game where he didn’t suit up. On the football field, he was a an all-class all-state defensive lineman in football. He lettered four years at Nebraska in basketball, playing in 82 games.