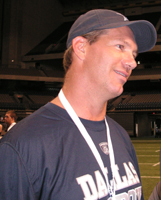 Athlete–A multi-sports talent, this tall young man graduated from Gothenburg High School in 1981. He set a record in the pole vault, 15-1 in 1981 and also won medals in the hurdles at state track meets. He was all-state in basketball and an all-state quarterback for the Swedes in football. After an outstanding career in college at the University of Wyoming, his national acclaim came from professional football where he won three Super Bowl rings as a tight end for the Dallas Cowboys in the 1990s. After this great career in football, he is back home on the range in western Nebraska. A very talented “Cowboy” all in all.

He was selected to the Kodak All-American football team in 1984 after setting an NCAA record for receiving yards per receptions by a tight end. He had 83 career receptions for 1,536 yards and ten touchdowns. Novacek also competed in track and field for the University of Wyoming. He won the Western Athletic Conference decathlon championship, earning All-American honors. He also set UW records for decathlon points, 7,615, and in the pole vault, 16’4″.

Novacek was drafted in the sixth round of the 1985 NFL Draft by the St. Louis Cardinals. After spending five seasons with the Cardinals, he signed with the Dallas Cowboys as a Plan B free agent. Novacek was a key contributor for Dallas in the early 1990s, assisting them to three Super Bowl wins in four seasons. In those games, he recorded a combined total of 17 receptions for 148 yards and two touchdowns. Novacek, who hadn’t played a game since Super Bowl XXX in 1996, officially retired from the NFL on July 15, 1997 due to a lingering back injury. In his 11 seasons, Novacek recorded 422 receptions for 4,630 yards and 30 touchdowns.

Novacek was commemorated for his 2008 induction into the College Football Hall of Fame at half-time of the Wyoming Cowboys game on 9/13/08.