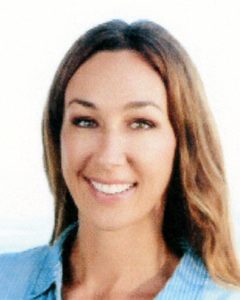 Jenny Kropp-Goess spent her high school career rewriting the record book at Grand Island Central Catholic.  A four-year letter winner in basketball and volleyball and an all-state selection in both. it was soon clear that she had exceptional volleyball skills.  Leading the Crusaders to the state finals three times and the state Championship in 1994 , she set school records with 25 kills in a game, 359 kills in a season, 1010 kills in a career and 102 blocks in a season.  In basketball, she set the school record for rebounds with 716 and for blocks in a game (17), season (179) and areer (412).  She went  on to earn All-American honors playing volleyball at Nebraska, helping the Huskers win four big 12 conference titles and reach the NCAA championship match three times.  Coach John Cook said she was the heart of the Huskers 2000 national championship team.  After college, she played professional indoor volleyball in Puerto Rico before embarking on a successful career in professional beach volleyball.