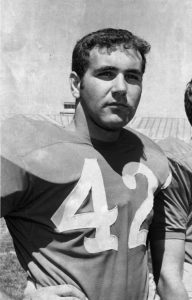 Omaha North’s Jerry Murtaugh appeared on recruiting radar for the nation’s top college football and wrestling programs. An undefeated state wrestling champion at 180 pounds and an All-American linebacker at Nebraska, he set tackle records for the 1970 national champion Cornhuskers. He signed as a free agent with the New England Patriots, but never played in the NFL because of knee injuries.