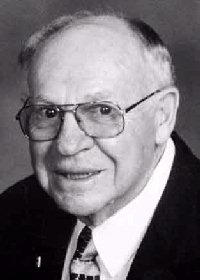 Official. Jerry’s 40-year officiating career started while he was in the military service.  While waiting for an injury to mend he started refereeing basketball games among service teams.  While attending Hastings College and on the basketball team, he did some intramural refing and then added some high school games while still competing himself.  After graduation, he accepted a job at Norfolk to teach in the Junior High.   It was here that he teamed up with Leonard “Soup” Campbell working both basketball and football for many years.  After completing his last basketball game in 1986 he became an observer of officials for the NSAA.  From 1976 to 1986 he taught a class on Mechanics of Officiating at Northeast Community College.   Jerry’s career spanned from the era of one official per game to two different for each game in basketball and from three to five in football.  Worked 16 State Basketball Tournaments. Head Referee for the first Shrine Football game.