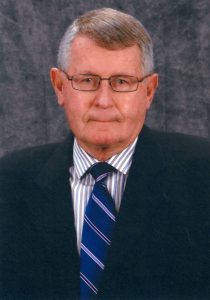 Contributor
As a coach, historian, promoter and documentarian, Jerry Stine dedicated countless hours to the betterment of Nebraska high school sports. Throughout his 40-year career, Stine coached boys’ basketball & track at Wheeler Central – Bartlett and girls’ basketball and boys’ and girls’ track at Bertrand. After leaving the coaching ranks, Stine continued to contribute to high school sports as a long-time member of the Nebraska High School Sports Hall of Fame Foundation’s board of directors, documenting and organizing the board’s historical research. A past-president of the Nebraska Coaches Association, Stine is the creator, author and secretary of the NCA milestone awards that bear his name.  Stine was inducted into the National High School Athletic Coaches Association Hall of Fame in 2000 and the University of Nebraska-Kearney Athletic Hall of Fame in 2006.