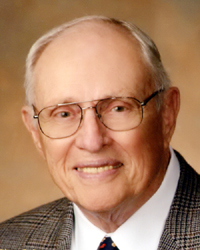 Football observers heaped their praise on Jim ‘Squat’ Myers from York, calling him the state’s most outstanding player in 1941. Described as a “speedy” back who possessed a “slick change of pace,” Myers led York to an undefeated season, scoring 16 touchdowns. He also led the state in punting. He was recruited by Notre Dame. Myers earned 12 letters at York, earning all-state tournament and second-team all-state honors in basketball. He also set the conference record in the pole vault as a freshman, going on to break that record every year. He won the all-class gold medal in the pole vault his senior year. Myers’ football career at Notre Dame never materialized. The Journal Star’s all-state team (with him on it) was published on a historic day, Dec. 7, 1941, and Myers joined the military. After serving in World War II, Myers returned to play football and run track for the Nebraska Cornhuskers, lettering in 1946 and 1947.