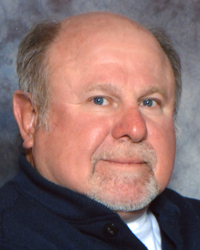 A defensive stalwart on the Nebraska Cornhuskers’ Team of the Century, Blahak made his mark on the high school scene competing in football, basketball and track. A Class B all-state football player in 1968, he led Scotus in rushing, scoring and interceptions as the Shamrocks claimed a state title. He led the basketball team in scoring his senior year, and turned to track in the spring where he won five state meet gold medals. His junior year, he won the 100-yard dash, the 180-yard low hurdles and the long jump. As a senior, he won the low hurdles and the long jump and qualified for the state meet in all five field events as well as the 100 and the 880-yard relay. At Nebraska, he started at cornerback for three years, earning All-Big Eight honors twice and second-team All-America honors as a senior. He went on to play five years in the NFL.