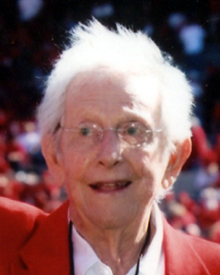 Joe Silverman was an established football and basketball referee in West Virginia before being stationed at the Lincoln Air Base during World War II. After service, Lincoln became his home. The Marshall University graduate worked the Nebraska state basketball tournament for the first time in 1943. He worked more tournaments later in the 1940s and 1950s, often working with Hall of Fame officials Max Roper and Mathias “Mutt” Volz. In 2007, he received the Clarence Swanson Memorial Award from the Nebraska Football Hall of Fame. As an athlete, he stood out on the fields of Huntington, W.V., and Marshall University.