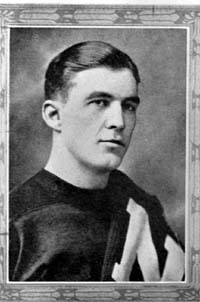 Athlete. It was often said of this legendary athlete that he was the first Nebraska high school track & field competitor to high jump six feet, pole vault twelve feet and long jump twenty-two feet. A 1922 graduate from Ansley High School in Custer County, he excelled to all sports: football, basketball, track & field and baseball. He played on two state championship teams in basketball. All-state in football, he was player-”coach” of the 1920 Ansley football team which went untied and unbeaten that season. At one time he held state records in three track events–the high jump, the pole vault and the long jump. As a football player at the University of Nebraska, he played on the team which defeated the “Four Horsemen” of Notre Dame twice as well as holding the great “Galloping Ghost” Red Grange scoreless in a defeat at Illinois.

Blair Newspaper:When the names of this year’s inductees to the Nebraska High School Hall of Fame are read, one of them should be recognized by Blair natives.

John “Choppy” Rhodes, who coached the 1938 Bear football team and returned for a two – year stint in 1941 and 1942, is one of the six Pioneers to be inducted at the 1998 Awards Banquet, which is slated for this Sunday in Lincoln.

Coach Rhodes, who died in 1951, was one of the state’s greatest athletes in the 1920’s. Prior to graduating from Ansley High School in 1922, “Choppy” was named to the first – ever Omaha World – Herald All – State Football Team. His high school exploits didn’t stop there, as he also simultaneously held three State Records in track, setting two of them at the 1922 State Meet. His leaps of 6’0″ in the High Jump and 21’10.5″ in the Long Jump (known then as the running broad jump), gave him two gold medals. His Pole Vault standard of 11’8″ went unequaled that year. As if that wasn’t enough, Rhodes also played on two State Championship basketball teams at Ansley. He also played baseball.

Following his stellar high school career, Rhodes took his athletic talents to the University of Nebraska. Success continued to follow him as well. He collected a total of eight varsity letters, one of only six to earn at least that many, including three in football and track. The other two came from the baseball diamond.

While playing for the Cornhusker football team, “Choppy” scored the winning touchdown in a 1923 win over Notre Dame and its “Four Horsemen” and found the end – zone in a 1925 victory over the University of Illinois and its vaunted running back “Red” Grange. He was an All – Conference football selection in 1924 and again in 1925, his efforts helped the baseball team win its conference championship, and he captured the all – around championship at the University of Illinois Relays in 1926.

After graduating, Rhodes was named head baseball coach at NU. His two – year stint produced the highest winning percentage ever. He then coached football at Wyoming University and the St. Louis professional football team prior to his three seasons at Blair.

The Nebraska High School Hall of Fame was established five years ago to honor athletes for outstanding high school careers; pioneers, administrators, coaches, officials and community members for significant involvement in high school athletics; and athletes who have made a noted impact on their chosen field or society after their high school graduation.

The Hall of Fame is a non – profit organization, organized with the idea of preserving the history of high school sports and to honor its past stars and leaders and to inspire future generations of high school students.