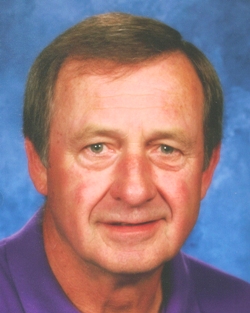 Lauded for building character and producing teams that played beyond their potential and rose to high levels of competition, John Faiman made his mark on countless athletes through a 48-year career that included 38 years as a head football coach at David City (4 years), McCook (2), Omaha South (6) and Bellevue West (26). His career also included 10 years as a college assistant coach at Washington State, Missouri, Utah and Kansas State. His Omaha South team claimed a Metro  Conference title and he led Bellevue West to an undefeated (9-0) regular season. At Bellevue West, his teams qualified for the playoffs in nine of 10 years, and in 2011, at age 70, he was believed to be the oldest head coach to take a team to the playoffs. A high school All-American quarterback, he started for the Nebraska Cornhuskers in Coach Bob Devaney’s first game as head coach, but a broken leg in practice ended his playing career.