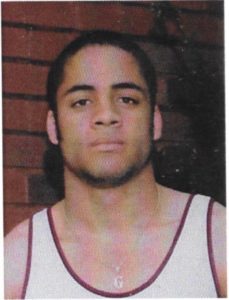 John was a natural who quickly excelled at whatever he did.  He didn’t play football until 8th grade, but was a star by his sophomore season.  He didn’t triple jump until his sophomore year, but he set the Class A State and State Meet records, won the Class A Gold Medal for three years, and was named the Nebraska Gatorade Athlete of the Year as a Senior.  A football All-State pick as a junior and senior, Gibson scored every way: kickoff, punt, fumble recovery, and interception returns and as a receiver.  The 1996 Omaha World Herald Athlete of the Year, Gibson battled injuries throughout the early part of his career with the Nebraska Cornhuskers.  He was a four-year letterman, playing in 44 games and was one of the team’s leading receivers in his senior season, starting 12 games, including the Rose Bowl.