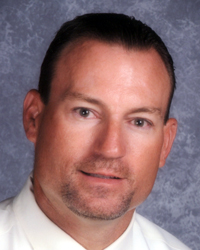 Class of 1988
Athlete
John Parrella played in three Super Bowls–the Buffalo Bills in 1994, the San Diego Chargers in 1995 and the Oakland Raiders in 2003–during a 13-year professional career at defensive tackle. His football days started at Grand Island Central Catholic High School where he excelled in football and was named a high-school All-American. He earned all-state honors twice and led the 1986 playoff team in tackles and receiving yards. A walk-on for the Nebraska Cornhuskers, Parrella lettered for three years, earning All-Big Eight honors in 1991 and 1992 and second-team All-American honors as a senior. He was a second-round draft pick in 1993 by the Buffalo Bills.