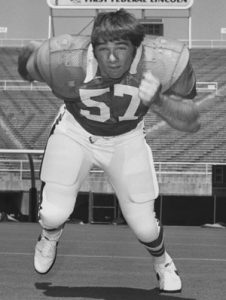 John Sherlock found fame and glory paving the way for the Nebraska Cornhuskers’ “Scoring Explosion” team of 1982 and 1983. It easily could have come on other fields. A consensus Nebraska high school Athlete of the Year in 1979, Sherlock stood out on the wrestling mat and the shot put circle as well as the football field. On the gridiron he was a three-year letterman at Omaha South, helping the Packers win the Metro Conference championship in 1977 and earning all-state honors in 1978. On the wrestling mat, he garnered numerous AAU championships and completed his high school career capturing the Class A heavyweight championship in 1978 and 1979, posting a two-year record of 61-0. A 60-foot shot putter, he earned the all-class gold medal at the state track meet as a junior and senior.

It’s been a few years since John Sherlock, data specialist in the College of Nursing, graduated from Omaha South High School in 1979. So it hadn’t even occurred to him that in 2013, he might be inducted into the Nebraska High School Sports Hall of Fame.

Do his co-workers in continuing nursing education know?

“Well,” he said sheepishly, “it kind of got leaked out in the paper.”

The news is out. And after more than 30 years, the memories came flooding back: “Coaches,” Sherlock said. “Situations. Long days. It was always fun, never work.”

Really? Yes, Sherlock said. He was always optimistic. Even on days when the coaches were yelling and making them stay late and do drills till they dropped, “I figured they couldn’t keep you overnight.”

The work paid off. Sherlock set the state record in the shot put. He was all-state in football, helping the Packers win a Metro championship. He went undefeated in his final two wrestling seasons, winning two state titles along the way. As a senior, he was the Omaha World-Herald’s prep athlete of the year.

He was so good in football he eventually became a starter on the University of Nebraska’s 1983 “Scoring Explosion” offense, as a tackle (“Every game we played was a track meet,” he said). But it was wrestling he loved most.

“Everything else was just to keep me in shape,” he said. He knew, as a serious wrestler, he’d be in training: “I figured, you can either run, or you can play something fun.” So he did.

And he had fun.

But his best moment in sports, he said, was when he was a freshman in high school, before anyone knew his name. He was the lowest seed in a wrestling tournament. He went up against Omaha North’s Paul DeBolt, the top seed (DeBolt was always the top seed in those days; he went on to become a first-team all-conference lineman at Nebraska-Omaha). Too young to fully realize what a big deal this was, Sherlock won, and walked off the mat.

What a feeling it was.

It’s been great to remember that long-ago wrestling match one more time.