Athlete— Small town girl reaches big time athletic success is the story of this talented 1977 graduate of Palmyra High School. During the 1976-77 high school season, she reached all-state status while wearing the red, white and blue of the Palmyra Panthers. Her drive to play this game soon carried her to the national scene. She went straight from high school to the world stage with the U.S. national volleyball program (first on the Junior National Team and then the National Team) and tryouts for the 1980 US Olympic Team (chosen alternate in a year when the US boycotted the Games). By 1984, she made the Olympic squad and was a hitter for the silver medal-winning US team in the Los Angeles Games.  She played professional volleyball in Italy for several years, then coached the sport,  and made her home abroad in Reggio Emilia, a small city in northern Italy. 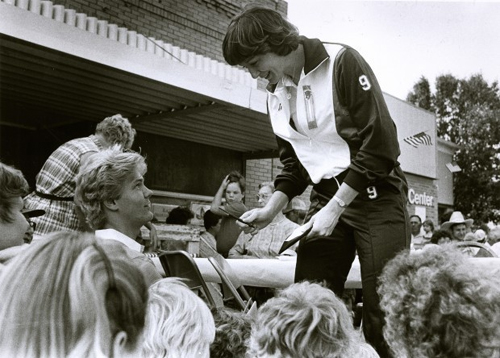 PALMYRA — It’s nice to be home, Julie Vollertsen said, though it’s hard to call it that anymore.

At this point, she’s lived in Italy longer than she ever lived in Palmyra — or in the United States for that matter.

But the small town always will be the place where she played her first games of volleyball and pushed Palmyra High School to its first appearance at the state tournament in 1976, securing herself a spot on the all-state team.

It’s where she began her path to the Nebraska High School Sports Hall of Fame, Sports Illustrated’s 50 Greatest Nebraska Athletes list and an Olympic silver medal.

Vollertsen doesn’t think of it that way. It’s where her family is and where she’s spent the last week visiting.

She acknowledges a lot has changed since she graduated high school here more than 30 years ago, but she says her Olympic story truly began with a tryout for the women’s junior national volleyball team in California.

“It was a six-week tryout,” she said. “There were girls from all around the country, but I was the only one who ended up staying on the team.”

From there, she trained vigorously and worked her way up to the women’s national team, chosen first as an alternate for the 1980 Olympic Games, then chosen for the team that went on to snag a bronze medal in the 1982 World Championships.

All the while, Vollertsen and her teammates had their eyes on the 1984 Los Angeles Olympic Games, where they knew they were making their way into uncharted territory.

Both the U.S. men’s and women’s teams failed to qualify for the 1972 or the 1976 Games, and neither team competed in the 1980 Games in Moscow because of the boycott.

“We had nothing to compare ourselves to,” she said. “We were the first team in years that could actually represent the United States and possibly win a medal.”

Alongside setter Debbie Green and spiker Flo Hyman, Vollertsen and the 1984 women’s national team went on to secure the silver medal, the team’s first in the Olympic Games.

Within a year, she had moved to Italy, where she played professionally and settled in a city called Reggio Emilia.

That’s when she first met local television journalist Lepoldo Melli, who invited Vollertsen on his show.

“He interviewed athletes and would commentate on local sports,” she said. “I was on there with a champion weightlifter, and he interviewed us back and forth.”

But Reggio Emilia is a small city, she said, and it wasn’t long until they met again and started dating.

Then, after four years in the professional league, Vollertsen retired and began to coach.

It was when she had her first son, Nicolo, in 1991, that she came to a crossroads.

“I had to make a choice: either family or coaching,” she said. “I chose family.”

It was the right one, she said. Nicolo, now 21 and nearly 6-foot-11, plays basketball professionally for Olimpia Milano and has his own Olympic dream as a member of the Italian national team. (Italy did not qualify for the London Games.) Her younger son, Enrico, 16, also is a rising basketball star.

“They are both amazing at what they do,” she said.

Much of her time is spent traveling to her sons’ basketball games with Lepoldo, who now is a corporate lawyer. She’s largely left the volleyball world behind.

“It’s a whole different game nowadays,” she said. “The quality of athletes is much higher.”’

The rules have changed, too. In the 80s, players couldn’t touch the net, there was no libero and the serve was just a way to get the play started, not an attack.

“We had to be more all-around players,” she said. “Now, it’s adapted for international play and has a little more variety. People can specialize in blocking or defense.”

A lot changed back home, too. When she graduated high school and began playing for the national team more than 30 years ago, the Husker volleyball program was just getting its feet off the ground, she said.

Nowadays, it produces some of the best athletes around — including Jordan Larson, the 6-foot-2 outside hitter competing in the 2012 London Olympic Games with the women’s national team.

Like Vollertsen, Larson grew up in a small Nebraska town.

“I’m so impressed by Larson,” she said. “It’s super to see her out there.”

Vollertsen does get a reminder of her Olympic experience nearly every time she watches volleyball: her coaches and many of her teammates coach at universities across the country.

“I think over the time we trained together, we gained a lot of knowledge about the game,” she said. “It was an incredible experience.”