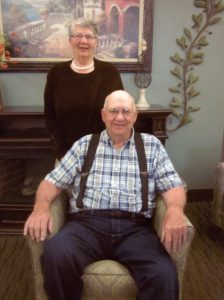 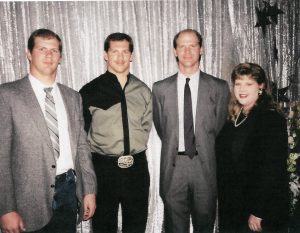 Pat was a 3 sport letter winner and 1955 graduate of Tekamah High School.  They were 9-0 in football, 18-3 in basketball, and Pat competed at the state track meet in the high hurdles, high jump, and long jump.  He competed at Peru State for one year and then Huron College, where he was a 3 sport letterman.  He coached in South Dakota and Iowa before coming to Gothenburg.  He was Head Coach of the 1992 Shrine Bowl and Head Coach of the Western Nebraska All Star game.

Son Jim was Gothenburg’s quarterback and pivot man in basketball.  He pole vaulted 14’6″ at the State meet and was an All-American punter at Rose Halman College in Terra Haute, Indiana.  He was an al-large participant in track at Wyoming.

Son Jay was also a 3 sport athlete and All State Quarterback his senior year.  As a junior he vaulted 15’1″ and as a senior at the State Track meet, he won both hurdle races, second in the high jump and 3rd in the vault.  He was an All American tight end at Wyoming and competed in the decathlon in track.  He played for the Phoenix Cardinals and Dallas Cowboys and was a Pro Bowler five times and had three Super Bowl Championships.

Son Jason (Bump) was also a 3 sport athlete at Gothenburg.  He set the state pole vault record at 16′ and led the state in the 300 intermediate hurdles.  He was drafted by the Cincinnati Bengals in 1990.  Jason’s son Carson, played quarterback at Shickley and Fairfield-Sandy Creek