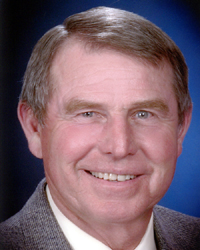 Coach. Keith Staehr gained a reputation for getting the most out of his teams, building a formidable squad out of very little talent. His Kimball teams often came away with victories over schools with larger enrollments and more talented athletes. He retired in 2000 with a 187-119-1 record that included four seasons, and three conference championships, at North Loup-Scotia. His Kimball teams qualified for the state playoffs seven times, winning five conference championships. He coached the North Shrine Bowl team in 1974 and was a head coach in the West Nebraska All-Star Game in 1980 and 1994. As an athlete, Staehr was a standout at York High School and Kearney State College. He was a four-year letterman in football and track at Kearney State, playing running back, cornerback and punter in football and ran hurdles in track. At York, he was an all-state quarterback and an all-state tournament selection in basketball.