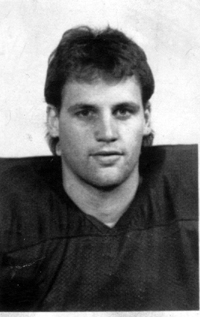 Athlete. The picture of a poised quarterback comes to mind in describing this 1982 graduate of Rushville High School. He was named all-state in both football and basketball during his secondary education and was outstanding as a pitcher in the summer. During his senior year he led the Rushville High Longhorns to a basketball winning season of 20-2 while averaging above 25 points per game. After high school, he honed his quarterback skills; first at Garden City Community College where he set national junior college records, and then three years at Colorado State as a starter. In a postseason appearance, he was voted most valuable player in an East-West Shrine game. He has played professional football for several teams, notably while with the Seattle team setting a NFL rookie record for passing.