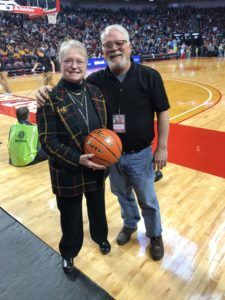 Ken Hambleton joined the Lincoln Journal Star sports staff in 1972 and Ryly Jane in 1974, becoming the cornerstones of the newspaper’s high school reporting until their joint retirement in 2017.  Ken was the Boys’ Prep Editor from 1982-’85 and Ryly Jane was the Girls’ Sports Editor from 1981-’85.  She took over as the Prep Sports Editor for the next 32 years, producing ratings, all-state and all-city teams, and steering the high school coverage of the state’s second -largest newspaper.  Ken moved on to cover Husker Football, but continued to regularly cover high school games and events.