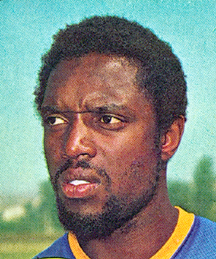 Ken Geddes was a member of the 1965 all-class and Class A all-state football teams. The 6-foot-2, 198-pound end also ran the third leg on Boys Town’s mile relay team that won the Class A and all-class gold medal at the state track meet. He started for the Boys Town basketball team that won the 1966 Class A basketball title and went on to play college football for the University of Nebraska from 1967 to 1970. He earned All-Big Eight honors as a linebacker in 1968 and as middle guard in 1969. He played in the Senior Bowl in 1969 and then in the Coaches All-American Game in 1970. The Detroit Lions selected Geddes in the seventh round of the 1970 NFL draft. He played eight years in the NFL for the Los Angeles Rams and Seattle Seahawks.