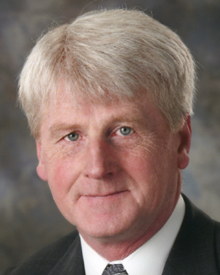 Nebraska high school’s athlete of the year in 1980, he was a three-sport prep standout whose fourth – and best sport – baseball, took him to the 1982 College World Series and the 1983 Pan American Games. Drafted by the Texas Rangers, he was All-American in baseball in 1985. At Aurora, Penner quarterbacked a Husky team that went undefeated in the regular season and first playoff appearance in 1979, then he earned all-class all-state honors in basketball as the Huskies went 22-3 and reached the state tournament semifinals in 1980. At the state track meet, he placed third in the 100 in 1980 and ran on school-record setting 400- and 1,600-meter relay teams.