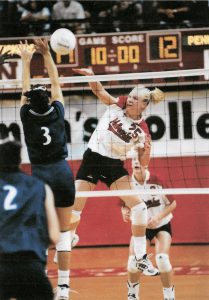 Chappell (Class of 1997)
Kim (Behrends) Buckendahl rewrote Nebraska high school volleyball’s record books. From her 42 kills in the state championship match to her 1,643 career kills, Behrends dominated small-town volleyball like no other. She led Chappell to back-to-back undefeated state championships and a 55-match winning streak. All-class all-state for two years and Class D-1 all-state all four years, she earned Nebraska Gatorade Player of the Year honors in 1996 and was Volleyball Magazine’s runner-up for National Player of the Year. Also a basketball standout, she finished her career with 1,384 points. The Lincoln Journal-Star’s 1997 Female Athlete of the Year, Behrends went on to letter four years on the Nebraska Cornhuskers volleyball team and was one of the tri-captains on the 34-0 national championship team of 2000.