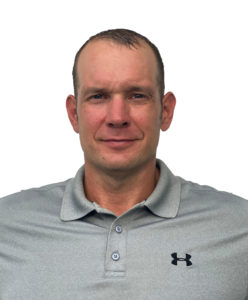 Multi-talented, Kurt found his niche as the center of attention.  The Lincoln Journal Star Male Athlete of the Year in 2002, Mann started on the offensive and defensive lines for the Islanders, earning All-State honors as a junior and senior.  A four-year letterman in basketball, the 6 foot 6 center averaged a double-double (12 points, 10 rebounds) for the 2002 State Championship team.  In track, he was a four-year medalist in the shot put, winning the All-Class Gold Medal as a senior.  His shot put of 62’ 4” established new school and conference records.  Kurt, who was No. 1 in his class academically, went on to be a three-year letterman for the Nebraska Cornhusker football team, starting at center and earning All-Big 12 honors.