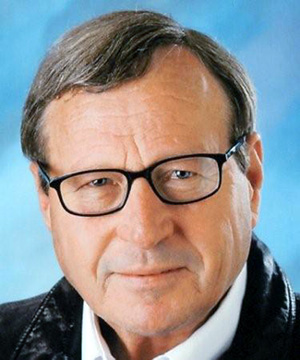 The first Class D athlete named the Lincoln Journal Star’s Athlete of the Year, Larry Vlasin earned allstate honors playing for Madrid’s undefeated eight-man football teams of 1963 and ’64. He set the national eight-man rushing record averaging 338.9 yards per game. He also earned all-state honors in basketball his junior and senior years and qualified for the state track meet in four events, placing third in the pole vault. He finished his basketball career with 1,895 points and scored 55 points in one game in 1965. A 5-10 outside shooter, many of his baskets came from what would later become 3-point range. An outstanding infielder in baseball, he was drafted by the Kansas City Athletics in the 1965 baseball draft. He played minor league baseball, rising to the Double-A level.

“Sure, you’d be sore on Saturdays after a game, but I grew up on a farm. We always got back to work on Saturday morning,” Vlasin said. “We’d haul bales and work around the farm. You lose the soreness by going back out and working.”

It’s no wonder Vlasin (pronounced Vla-SHEEN) would be a bit sore. He averaged 338.9 total yards per game, still the national eight-man record, while helping Madrid to back-to-back undefeated seasons in 1963 and ’64.

After a basketball season during which he averaged 26.9 points and 12 assists per game, he qualified for four events at the state track meet. Those performances were enough to earn him the Journal Star athlete of the year award in 1965, the first time an athlete from a Class D school was honored.

“I played quarterback, so that total was rushing, passing and my punt returns and kick returns,” said Vlasin, now a stockbroker in McCook. “I also played safety. I guess I just never left the field, because I kicked off and kicked extra points and a few field goals.”

Vlasin said he faced a dilemma when he graduated from high school.  “Joe Cipriano and Tony Sharpe offered me a half baseball and half basketball scholarship to Nebraska, so I had to decide between that and professional baseball,” he said. “Kansas City offered a pretty good bonus, which paid for my college education.”  Vlasin signed with the Kansas City Athletics.

“A couple of years later, they moved to Oakland. I played five years of minor-league ball and got as high as double-A with a triple-A contract in hand,” Vlasin said. “But with the Vietnam War heating up, I though I would have to go into the service. So I went to college at Chadron State and then got married. Since I’d signed a pro contract, I couldn’t be in sports in college.”

He coached football, basketball and track at Culbertson, Cozad and Gordon before finishing his coaching career as the head basketball coach at McCook.  “I don’t think the kids today need advice from me. Things are so different. The kids are so much bigger and stronger,” he said. “But I guess if I told them anything, it would be to go to a college where you can play and get a good education.”