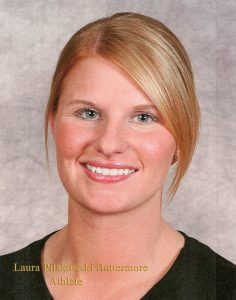 Laura (Pilakowski) Buttermore excelled on every field and court. The first female four-year, three-sport letterman at Columbus High School, she earned all-state honors in volleyball and basketball and qualified for the state track meet all four years. The consensus 1999 Female Athlete of the Year, she was the Nebraska Gatorade Volleyball Player of the Year as a senior, averaged a double double on the basketball court her junior and senior years and won the long jump gold medal as a sophomore. At Nebraska, she became a two-time volleyball All-American, helping lead the Huskers to the national championship in 2000. She finished her career playing on the Husker women’s basketball team.