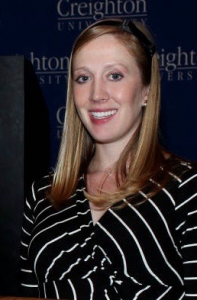 Omaha Marian (Class of 2001)
The Athlete of the Year tag stuck to Omaha Marian’s Laura Spanheimer, who twice earned the honor from the Lincoln Journal-Star and as a senior from the Omaha World-Herald. She led Marian to back-to-back state basketball championships those years, earning all-metro and all-state accolades. An outstanding runner as well, she burst on the scene by winning the All-Class gold medal in the 1,600 at the state meet as a freshman. She went on to win two individual 800 gold medals and ran on four state-champion 4×800 relays, including one that set a state and state meet record. In cross country, she finished second in state as a sophomore and junior and won the event as a senior. At Creighton University, she earned All-Missouri Valley basketball honors and finished her career with the most steals in Bluejay history and the second-highest total of games played.