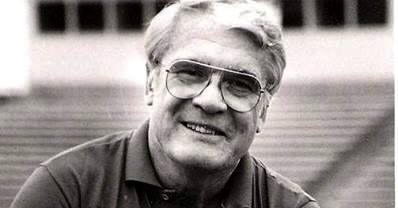 Athlete. Several political legends and public servants have walked within the fair city of McCook, Nebraska, but this 1947 graduate of McCook High School is one of the leading athletic legends. Known as a triple-threat in the high school sports of football, basketball and track; he helped the Bison run roughshod over opposition on the gridiron for three years with a football record of 24 wins, 4 losses and 1 tie; including the state championship year of 1946. Interestingly, he was named all-state his last year as a quarterback and all-state the previous year as a fullback. Also named to all-state level in basketball, playing in the state tournament three times. His impact upon high school track & field was a lasting one as both a sprinter and a hurdler, once holding the state record in the high hurdles.

Leo McKillip was a high school star in McCook, played football at Notre Dame and brought a Dana College football program to life.

But his favorite stories always took place off the field, said his son, Blaine.

“He was really focused on how to develop people through sports,” Blaine McKillip said.

The elder McKillip, 84, died Tuesday from complications after a fall.

William “Leo” McKillip’s athletic exploits stretch back to his high school days in McCook from 1944 to 1947. He started four years in both basketball and football and won several gold medals in track.

He was part of the football team that was named Class A state champion in 1946, and his basketball team reached state three times.

McKillip disappointed many in Nebraska when he decided to play football for Frank Leahy at Notre Dame. Leahy had learned under another Irish legend, Knute Rockne.

“He knew even then he wanted to coach. And he wanted to learn from the best, so he played for Leahy,” Blaine Mc­Killip said. “When Notre Dame played Nebraska (in 1948), he got booed.”

He also ran track for the Irish.

McKillip coached at Kimball High School, Idaho State and St. Mary’s College (Calif.) and was a defensive coordinator at Edmonton and Winnipeg in the Canadian Football League and with the Washington Federals of the short-lived USFL in the 1980s.

He came back to Nebraska to retire, but served as the head football coach for eight years and athletic director at now-closed Dana College in Blair, Neb. Only 30 players showed up for his first practice in 1985, but in 1987, the Vikings reached the NAIA Division II national playoffs.

McKillip was chosen as The World-Herald small-college coach of the year following that season.

He’d tell his children, “In coaching you are either in the penthouse or outhouse, and I’ve been in both places.”

McKillip, who had a doctorate in education, kept in touch with many of his former athletes, especially those at Dana.

His athletes were at the center of some of McKillip’s funniest stories, his son said.

When he was at Idaho State, the whole team purchased horns during a visit to a shopping center while on a bowl trip.

“Then they’d go into another store and start honking from throughout the store,” his son said.

The 2011 event was special to granddaughters Molly and Madeline because former Nebraska football coach Tom Osborne came over and talked to them about what a great coach their grandfather was and how he’d listen to his exploits on the radio.

“It means a lot to them,” Blaine Mc­Killip said.

Blaine and his wife, Tracy, have five children and one grandson. McKillip also is survived by son Creighton, who played for his dad at Dana. McKillip’s wife, Patsy, died in 2000.