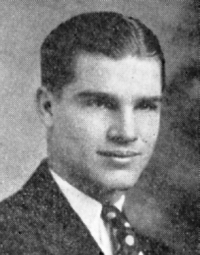 Athlete.  One of two native Nebraskans to be named All-American in basketball, Les “Beanie” Witte was an all around athlete at Lincoln High.  Les was a teammate of Bernie Masterson on the 23-0-2 Links football teams from 1927-29.  He starred on the 1929 and 1930 basketball teams that went 40-10 winning the 1920 state tournament.  Recruited by his older brother,  “Dutch” Witte, who was coaching at Wyoming, he immediately became a star, being named All-American three years in a row — 1932, 1933 and 1934.  In the pre-NCAA Tournament days, Wyoming was selected as the 1934 national champions by the Helms Athletic Foundation, the only collegiate voting poll of the era.