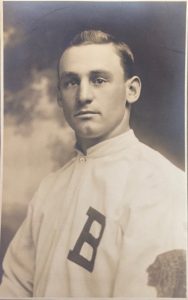 Touted as one of  the best all-around athlete ever produced by a Nebraska high school.  Les earned seven letters in a high school career cut short by signing a major league baseball contract.  High school honors included All-State in football for three years.  He was a member of the basketball team that won the conference three straight years with a record of 46-7, that included a 37 game win streak. An above average sprinter in track he won the 220 in the 1909 State Meet.  In a time when the rules about professional athletes were a bit different, Les attended Springfield College in the off-season where he received All-American honors in football.  Called up by the Boston Braves in 1913, he started his compilation of a lifetime batting average of   .282.  Les was considered one of the heroes in the 1914 World Series Championship by the Braves.  He went on to play with several other major league teams and held the off-season job of Physical Education Director at Rice.   Later on served as basketball coach at Indiana and then back to Springfield.  He was an originator of baseball schools and was instrumental in getting baseball as a sport in the 1936 Olympics.  Les passed away in January of 1962. Les Mann’s Big League Career   Games Average HR RBI Career 1493 .282 44 503 World Series 9 .241 0 3

Mann was platooned in the outfield of the 1914 World Champion Braves; the next year he jumped to the Federal League and led that circuit with 19 triples. He headed a player revolt for better shares in the 1918 WS as a member of the pennant-winning Cubs. He batted over .300 six times, mostly as a reserve; in his three seasons with the Cardinals (1921-23), he hit .328, .347, and .371. He turned in Giant pitcher Phil Douglas for writing him a letter inviting a bribe in 1922. After his playing days, Mann formed the National Amateur Baseball Association. In 1936, he persuaded the World Olympic Committee to add baseball as an exhibition event; two American teams puzzled a throng of Germans, who formed a larger crowd than had ever attended a World Series game.