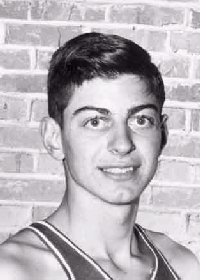 Athlete. One of the few big men in the state in his day at 6’8’, Bus Whitehead graduated from Scottsbluff High School in 1945.  An outstanding senior year contributed to a trip to Lincoln for the Class A State Basketball Championship.  One of the few losses for the season was in the finals when Scottsbluff lost to Creighton Prep.  Actively recruited by a number of major universities, he selected the University of Nebraska.   His improvement as a college player was beyond expectations: during both his junior and senior years he was selected to the All Big 7 team.  As a senior, he was the only unanimous selection to the All Big 7 team. In both of his last two years Nebraska was a Conference Co-Champion.  Bus graduated from Nebraska holding seven Nebraska scoring records and was selected as a District 5 All American, and later was selected to the All-Time University of Nebraska Basketball Team. Played in College All-Star East –West game at Madison Square Garden. Outstanding player for the Phillips 66 Oilers in the National Industrial League. Nebraska Basketball Hall of Fame, Lincoln Journal Star Hall of Fame, and the Scottsbluff Hall of Fame.  Longtime Lincoln resident Bus and his wife Ruth have three children and five grandchildren.