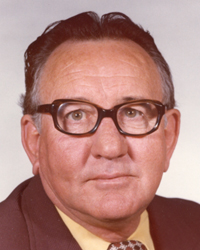 Coach
Mark Russell’s coaching tenure at Broken Bow lasted nearly 40 years and included nearly every sport. A track coach for 39 seasons, starting in 1947, he led the Indians to the state title in 1959, ’60 and ’61 and a runner-up finish in 1965. As the head football coach for 27 years, he had Broken Bow in the final Top Ten 12 times and was chosen to coach the Shrine Bowl in 1961. He also coached the cross country team for nine years, the basketball team for five years and coached the wrestling team in its first year of existence. In the summer, he directed the city’s baseball, golf, softball and volleyball programs. In 1987, the school board named the football/track complex at Broken Bow Mark Russell Field.