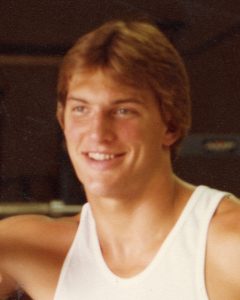 Athlete. The attraction is to the weight events for many strong young men in high school. Many double in the events, but rarely do they reach star status in both the shot put and discus throw. Marty Kobza of Schuyler Central High School made it, big time, especially in 1981. His top throw in the shot put reached 66’11 1/2″, plus he was the first in history to reach 200 feet in the discus. His boys state meet toss of 201-7 toss became the all-time record at the time. Named high school athlete of the year, his discus throw was second best in the entire nation in 1981. Later, while at Arkansas in college, he was six times an All-American and a member of the World University Team in 1985.