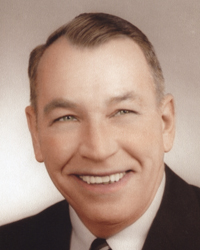 Mathias “Mutt” Volz’s career as an official and an evaluator lasted 60 years, from high schools to colleges and in football and basketball. An all-state athlete at Omaha South, and a letterman in basketball and baseball, Volz began his officiating career in high schools and the Missouri Valley Conference. He worked many big games, including the Sugar Bowl and the Rose Bowl, but continued to work high school games in Lincoln. Years later, he confined his officiating to the Big Six, which later became the Big Eight. He retired from the field in 1964, but was appointed by the league to observe and review officials, a duty he performed until 1990.