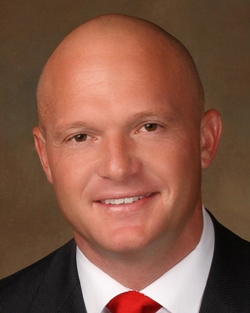 Best known for his touchdown off a deflected pass against Missouri, a catch that saved Nebraska’s national championship season of 1997, Matt Davison honed his receiving skills at Tecumseh High School where he set numerous state records for receiving yards, including career (3,623), season (1,516) and single-game (313). He also set single-game and career-records for touchdown receptions, finishing with 51. All-state in basketball as well as football, Davison led Tecumseh to its first state championship. He scored a school-record 1,976 points in his career, 702 points in a season and 54-points in a single game on the hard court. He also qualified for the state track meet in three events.

Davison dove to scoop up the ball when a pass from Scott Frost bounced off Shevin Wiggins’ foot in the end zone. The touchdown, in the closing seconds of the 1997 game at Missouri, tied the game and the Huskers went on to win.

But when Davison thinks about his high school sports career, football isn’t his first memory.

“I didn’t think I’d be playing football. During my freshman and sophomore years, people could have come to football games and barely know I played,” the Tecumseh graduate said. “My junior year, our quarterback, Danny Thies, could throw as well as anybody in the state. We threw the ball a little bit and I had a big season.

“Even then, Nebraska was the best team in nation and to get a scholarship offer was something I didn’t think would happen. I went to only one football camp in my life, at Nebraska, and Tom Osborne offered me a scholarship.”

Davison is one of 10 athletes, four coaches, one official and two contributors who will be inducted into the Nebraska High School Sports Hall of Fame this fall. Davison was the Lincoln Journal Star athlete of the year in 1997 after earning Super-State honors in football and leading his basketball team to an undefeated season and the Class C-2 state title en route to all-state honors.

Davison said basketball was his passion, although he also ran track and played baseball.

“Basketball was my first love. I enjoyed playing it more than anything else. My football memories are more from college,” Davison said. “When I think about high school, I think about our state championship basketball season. Chris Hutt was such a good influence on me, and not just as a coach.”

“I think about the hard work I learned being from a small town and growing up on a farm. I had parents who taught me work ethic and I was very lucky to have good coaching in a small community,” he said. “When I think about games, I think about my buddies, my friends. That’s what’s special about high school to me.

“We had big goals to win a state championship. Our football team only lost six games in four years. But in basketball, we did win state. Winning a state title with friends you’ve known your whole life is really special.”