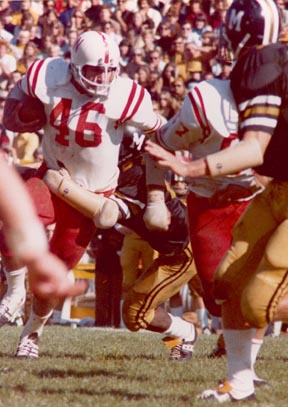 The Lincoln Journal-Star and Omaha World-Herald’s 1970 athlete of the year was All-class all-state in football in 1969. Also was a 3-year starter in a great era of high school basketball and starred in baseball (two-time all-city) for the Rockets. Northeast won basketball state championships his sophomore and senior years. In 2004, he still ranked fourth in the all-time LNE scoring chart in basketball.  The fullback lettered in football at Nebraska from 1971 (national championship year) to 1973 and played two years for the New England Patriots.