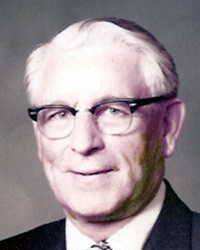 A Lincoln native, Max Roper started officiating basketball in 1923 when one official was enough, despite the work load required by the center jump after each basket. One of the most respected officials of his day, he worked his first state tournament in 1930 and officiated the state tournament each year until 1948. One year he teamed with fellow Hall of Fame referee Mutt Volz to work one site at the state tournament where they worked an entire day, alternating jobs where one sold tickets while the other officiated the game. Roper also officiated football, first at the high school level then working his way into the college ranks. His last game was the 1948 Orange Bowl where he was the head linesman.